Disease is natural and unavoidable. Today’s global order, however, produces epidemiological environments that favor the accelerated spread of both infectious and chronic disease. The current pandemic is a case in point. Rather than focusing on it narrowly, let us look into the mirror of COVID-19.

Big wild animals, freshwater animals, amphibians and reptiles, marine animals, all manner of birds, insects, the anonymous of the tropics, and others are experiencing species extinctions, population drops, and range contractions. The holocaust of animals leaves behind “empty world syndrome.” This is not only an ecological disaster. The world is also emptied of their numinous signs—their trails, dens, tracks, nests, burrows, cries, and songs. Wild animals design and enrich the Earth with their physical presence and their inner lives. On the flipside of ecological desolation, spiritual disenchantment, and the immense suffering of animals is the “Wuhan wildlife market,” a tip of the iceberg of the perverted worldwide reduction of animals to slavery, body parts, and meat. The times beg for letting wild animals be, filling the world with vibrant ecologies and enchanted mindscapes.

By ceaselessly breaching the boundaries between human and wild habitat realms, we have set a mass extinction episode into motion, while ferreting out dangerous pathogens harbored by immune animal hosts. Experts expect more such pathogens are in the pipeline. Yet over the last decades, we have seen apologists for human encroachment into the wild tell us that human-nature boundaries are “sociocultural constructs.” One wonders what they are thinking now, when respecting those boundaries evidently augurs well-being for humans and nonhumans alike. We can choose to honor the boundaries beyond which wilderness abounds, and let wild beings live free of human invasion and violence.

By increasing our numbers, locally and globally, and by flouting the population question altogether in mainstream and other circles, humanity has magnified habitat destruction and defaunation, and thus the spread of zoonotic diseases as well. Growing human numbers propel the spread of agriculture, hunting for subsistence and markets, raiding forests for construction and fuel material, and the surge of enterprises for export products. Additionally, large urban populations accelerate the transmission and persistence of infectious disease, and thus the possibility of healthcare becoming overwhelmed by large numbers of people needing care. We can acknowledge how the population factor has become deleterious for human and nonhuman worlds, and decelerate demographic growth by bringing education and family planning to every human being on the planet.

The immune-compromised, the urban and rural poor, the incarcerated and institutionalized, and other disempowered people bear the brunt of (infectious and chronic) disease. Globally, the poor and lower-middle class are targeted by junk food purveyors with their disease-causing products. At least 2 billion people worldwide are deficient in vital micronutrients and thus more vulnerable.[i] Hundreds of millions of poor people, living in densely populated urban environments and lacking adequate sanitation conditions, are at greater peril. Prisoners and nursing-home elders are at risk, and many without the consolation that society even cares. Generally, those in the lower strata are more likely to get sick, more likely to die, more likely to be invisible, and more likely to not even be counted in the epidemiological toll. It is high time to redeem society’s ostensible belief in human equality, ensuring good living conditions, healthy food, high-quality education and healthcare, loving care, and dignity for all.

The engine of the global economy is trade, reliant on infrastructure. Crisscrossing the globe, infrastructure conducts unimaginable amounts of (mostly unnecessary) stuff, serving a growing and getting-richer human population. The infrastructure grid also encourages much gratuitous movement of people. Infrastructure development today is burgeoning, piercing the world’s remaining wild places for logging, mining, poaching, and agriculture, thus driving species extinctions and ecological degradation while flushing out pathogens. We might choose to emerge from the current pandemic crisis less restless, less materialistic, and with the wisdom to cease, undo, or vastly curtail infrastructure buildout especially into the wild.

It reflects a broken food system

Animal agriculture and industrial fishing are the planet’s Death Star. Industrial fishing takes obscene amounts of sea life and kills untold numbers of bystanders, while animal agriculture uses outrageous amounts of land, freshwater, and fossil fuels, spewing pollution at every step of its operation. Mass food production is the fatal intersection of overpopulation, global trade, and social stratification. Factory farming is the food system’s most consequential and perverse node. As long as it exists, it will be impossible to halt ecocide, slow down climate change, and prevent pandemics. Factory farms are places of suffering and pestilence. Animals are crowded in squalid conditions, crippled by genetic and physical manipulations, reproductively abused for the sake of mass-produced cheap food, and stuffed with antibiotics, hormones, chemicals, bad fodder, and a good portion of the industrial fish catch. The tortured flesh of animals is turned into human food. Factory farms brew infectious diseases and promulgate chronic diseases, like heart disease, hypertension, diabetes, obesity, and cancer (along with their syndemic conditions of depression and anxiety). The two classes of disease synergize: Those suffering from chronic diseases caused by animal-product consumption are more at risk when zoonotic infectious diseases sweep through. Thus, it is not only the wild meat markets that need to be shuttered, but factory farms as well, halting ecological drawdown and pollution, ending the anguish of animals, and preventing much human suffering and premature death.

Eating wild and domestic animals and their products is completely out of kilter with Earth’s integrity, animal well-being, and human health. The exaggerated predilection for carnivory is akin to a mass fallacy turned into conventional insanity. If eating trends continue, by 2050 the global livestock population will eat as much food as 4 billion people.[ii] If eating trends continue, Southeast Asia’s forests among others will be bereft of wild animals, turned into “prestigious meat” for middle-class consumers. Embracing fresh, diverse, and delicious plant-based foods, on the other hand, will restore the ocean, end defaunation, free habitat, stop animal suffering, and make human tastebuds sing, energy levels soar, and immune systems resilient.

The pandemic we are living through is a mirror to defaunation, habitat destruction, overpopulation, social inequality, excessive movement of stuff and people, infrastructural sprawl, a broken food system, and socially conditioned animal-eating mania. All of these things are also causing mass extinction, climate breakdown, ocean ecosystem collapse, global toxification, mega-fires, environmental refugees, and an imminent healthcare crisis from both infectious and chronic diseases. If we refuse to heed the systemic underpinnings of COVID-19, the current epidemiological debacle will surely be dwarfed by other catastrophes in the not too distant future.

Read ‘The COVID-19 mirror’, by Eileen Crist, on the #EarthTongues blog

One thought on “The COVID-19 mirror”

Uncompromising, incisive writing driven by love for the living world

This blog is brought to you by The Ecological Citizen. Sign up here for alerts to new content on the blog and in the journal (link opens in new tab). 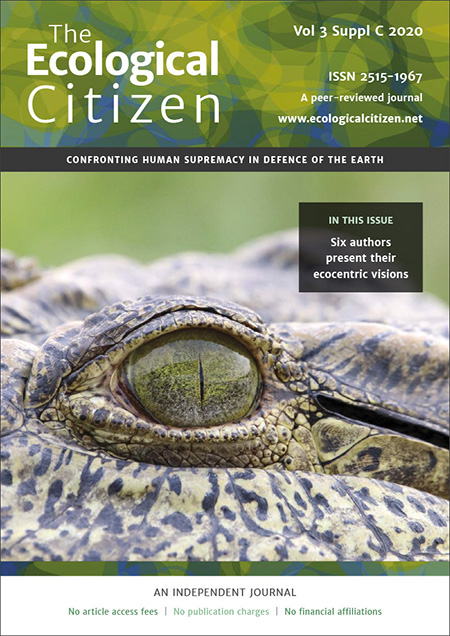